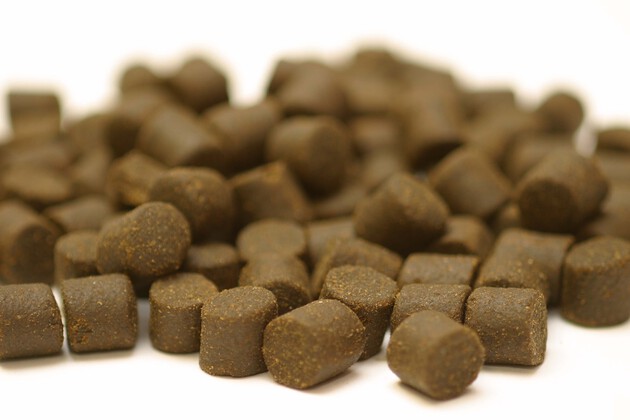 Producers of Norwegian salmon feed have begun to use completely new ingredients, according to a report on raw materials for salmon and trout.

For the fifth time since 2010, Nofima has compiled an overview of ingredients used in Norwegian salmon feed. The documentation is based on feed in 2020 from the four largest feed companies. It shows that the composition of feed for Norwegian farmed salmon is approximately the same as in the previous report in 2016. The same applies to the salmon’s utilisation of the feed. There has been a small increase in the volume of both feed and farmed salmon.

Insect meal and microalgae in feed 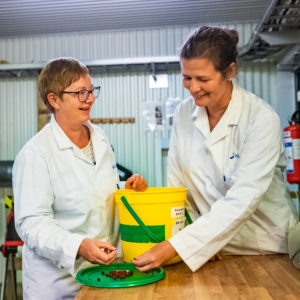 Senior scientists Trine Ytrestøyl and Turid Synnøve Aas in Nofima are among the authors of the report. Photo: Terje Aamodt © Nofima.

But there is one small and important change.

“It is that some new ingredients, such as insect meal, single cell protein, fermented products and microalgae were used”, says Aas.

Aas is a researcher in feed and nutrition at Nofima, and is the main author behind the recent report on the utilisation of feed resources in Norwegian salmon farming. This report was produced with data in 2020, and is an update of the corresponding report from 2016.

“The report provides a basis for decision-makers on how we can use the resources and manage them in the best possible way”, says Aas.

The Government has set a goal that more of the salmon feed should be produced from Norwegian resources, and that all feed should be from sustainable sources. This report from Nofima provides indications of how the fish feed is doing from the start. 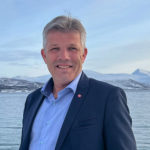 “Feed is the largest source of greenhouse gas emissions in the aquaculture industry. It is therefore crucial that more manufacturers use new, sustainable raw materials. In the next few years, we must see a sharp increase in the use of sustainable raw materials produced in Norway. This can lay the foundation for a new industrial adventure along the coast”, says Minister of Fisheries and Marine Affairs Bjørnar Skjæran.

“The government has a goal that all feed for aquaculture will come from sustainable sources by 2030, and we will thus create a new industry in Norway. If we are to succeed in finding the best and most effective solutions, industry, research and politics must work together”, says Skjæran.

Nofima’s report does not assess whether the ingredients are sustainable. But the researchers have examined certifications. The majority of marine raw materials are certified under various schemes, and all soy protein concentrate was certified as not genetically modified.

The researchers have also documented the country or area of origin for almost all the ingredients. The report shows that just over 10% of these ingredients came from Russia in 2020.

Norway has a production of rainbow trout that corresponds to 6% of the salmon production. The utilisation of resources in the production of trout has been reported for the first time. The report shows that there are some minor differences in utilisation between the two species, but they are almost equal.

Respect to those who invest 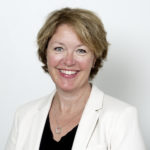 Salmon feed in 2020 consisted of 12% fishmeal, 10% fish oil, 41% vegetable protein sources, 20% vegetable oils, 13% carbohydrate sources and 4% micro-ingredients. In addition, 0.4% of new ingredients such as insect meal and microalgae were used.

Bente Torstensen, former researcher in fish nutrition and now head of the aquaculture division at Nofima, thinks this is promising, despite the low number.

“There is a huge volume of an ingredient needed to make up a large proportion of salmon feed. It’s very demanding, but it’s underway. We cheer on big and small producers who invest and dare to take a chance, because it determines how much and how fast the salmon’s diet changes”, says Torstensen.